A downloadable game for Windows

A little Slime found the "Slime Crown" ..., now he has the Power to change his Color at will. He is superior to any Slime of the same Color and sets out to become the "Slime King".

Could you share a PICO-8 cartridge of the game? Screenshots looks very nice and I’d like to try, but don’t have a Windows computer.

The Idea came up in Pico 8, but I'm developing the Game with a different Engine because it is too big for Pico.

Aah, too bad. Would it have web or mac version when you are finished?

Maybe it will also depend on the switch.

My video on the game.

Neat little game but just remember that color blind people may struggle with this game a bit and get frustrated because often it is trial + error if they live or die when they are [ or aren't ] the correct color esp. on level 3 running across the ground

Graphics are very cute, but I hate the incredibly short little music loop.

The main gameplay mechanic was really unique and I liked it. However, jumping felt overly precise and difficult.

I think you need to make your game a lot more forgiving. The jump should last longer or give you a couple frames towards the top to adjust your postion horizontally. The jump is very aesthetically pleasing but not good for gameplay. I think the jump alone made playing this game very frustrating. Also I think your game could benefit from using lerp() or using an approach() function. Responsiveness is good in a platformer, but just a little bit more of easing into a run and going up in a parabola motion rather that suddenly jerking up and jerking back down will actually make your game more intuitive and easier to control.

As others have said the final boss should start with a random order and cycle through colors in order, otherwise you are punishing the player for thinking ahead by making things random. Make sure in your final version you aren't forced to make such sudden color changes in the first stages, because the color changes aren't intuitive and you need to provide the player enough time to learn the new skill while also ensuring there is a rewarding skill curve so players don't quit from frustration or boredom.

As it is I really felt like I was forcing myself to finish your game in level 4 specifically as I was dying over and over.

Your game looks very cool by the way. Consider adding a visual representation of the color queue so you don't always have to remember color order.

I'm not a music critic, but I liked how the song matched up with the animations but in general it got very annoying and I would've liked more ambient sounding music.

Pretty fun! If I had one complaint I would say that I did not like the way the final boss changes randomly, made it very hard/frustrating, but I loved how he changed faster and faster the more damage he took. Since this game is all about quick reaction time, have you thought about giving the player a time score for each level?

Thanks for your Feedback, when the game is finished there will probably be a Speedrun Mode.

Having to memorize the order of the colors and how many colors to cycle through to get to the desired one made the game needlessly hard. Having a dedicated gamepad button for each color would make more sense.

why not use z for jump instead of y? This was literally a deal breaker for me it was annoying to stretch my hand across the keyboard to jump 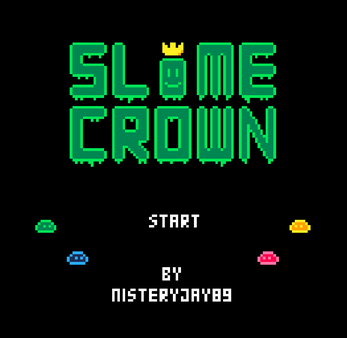 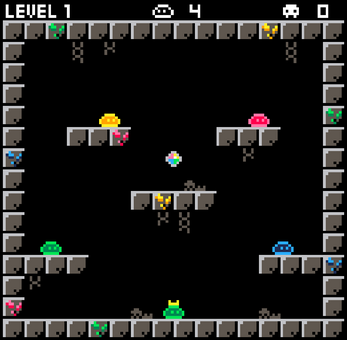 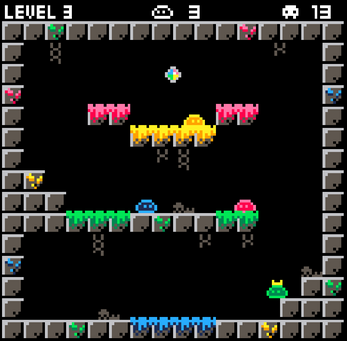 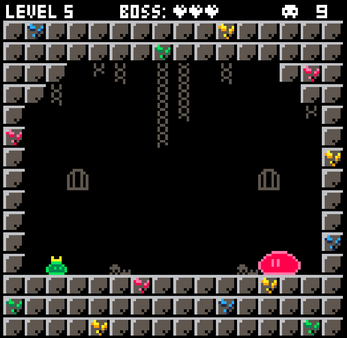